It’s your fear, not ours. You have to figure out what you need to feel safe, not us.
If you see Stalin around the corner of every effort to make Government compassionate, that is your paranoia - not the basis of a rational discussion.

Is it fear? Or is it prudence?
I’m not seeing the “existential need” to fundamentally alter the Western (US in my case) governments to “try” something new. It’s not as if this “new” government and society have a track record of “making it better for humanity and the world”. I don’t think it’s unreasonable to ask the question why “enlightened authoritarian collectivism” is going to work out better this time around.
Progressives may claim that the “intent is for betterment of humankind” this time around, but isn’t that exactly how it was promoted every other time it’s been tried?

Maybe I’m not clear on what “enlightened” or “integral” is, but I can’t identify any “2nd tier” leaders in the US government today (Biden, Harris, Schumer, Pelosi, Zuckerberg, Bezos, Trump, McConnell, et al …).
What I do see are two camps. One camp look to be stewards of our democracy (with the usual messy graftiness and corruptioniness). Whilst the other camp wants to fundamentally change from our current “government for the people by the people” to a “people that do as they’re told by the governing class”.

Like I’ve said several times. The Progressives control the House, Senate, and White House. Get the legislation passed and executive orders in place, and it would be nice to also see some good old integral “include and transcend” with all lower level 10M’s of citizens as well.

but I dont think this is possible until everyone’s at a high stage of development.

@Julia248 I agree with observation

… The “fight or flight” triggers seem to have migrated strongly in the fight response direction. It’s the spiritual quest of personal transformation that will lead a spiritual evolution that will change the world. As we personally grow from within our spiritual space the better the world becomes.

@excecutive - disagree. People show a range of responses - fight, flight, freeze and fawn are common ones. Do you have any evidence of people mainly going in the direction of fight?

Edit - agree that personal transformation is very important however, though sometimes it takes more than that and help from others is needed. If you look at the Buddha, for example, he trained under a range of teachers and did so many different practices before he sat under the bodhi tree. His life in the palace might also have helped with his enlightenment. I think there are very different paths for different people depending on their personalities and different life experiences.

As with most shadows, there is both truth and untruth in reasons to fear both models.

@raybennett I agree with this observation as well

… The solution to the “fight or flight” triggers requires a spiritual solution of personal transformation. The spiritual evolution will change into “a new earth”, … as you have previously referenced elsewhere here, that Eckhart Tolle explains beautifully. It’s personal spiritual growth from within that will better our earth and society. ~ Peace

I think the question is worth answering

@FermentedAgave at the risk of sounding like a broken record the solution is personal transformation of a spiritual evolution that will change the world.

@FermentedAgave at the risk of sounding like a broken record the solution is personal transformation of a spiritual evolution that will change the world.

We had wandered into the external quadrants - the realm of governments, regulations, external structures, but no one was trying to ignore internal transformation. I like the spiral model of development - Internal Individual, Internal Collective, External Behavior, External Systems, which then ALL cycles back in the Virtuous Cycle that we are enjoying.

The Quadrant Map gives us a 2D representation (Internal Singular, etc), but as humans our internal and external realms are influenced/impacted/developed/stunted in an iterative or spiral dynamic (at least that’s my layman’s understanding). Edit: I think I just said kind of the same thing @Julia248 just said. 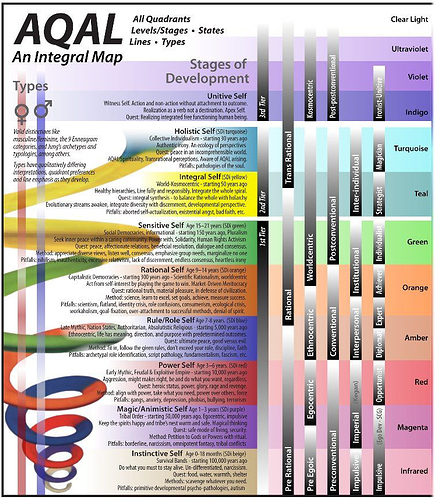 You’re back in the conversation thank you @Julia248 .

Do you have any evidence of people mainly going in the direction of fight?

I try to tune out where I can … but I do recall there was fighting in Washington DC on January 6, 2021. Also … Violence in France yesterday https://www.cnn.com/europe/live-news/france-strikes-intl/index.html … There’s also the … “mostly non-violent” vandalism of BLM?

The “fight or flight” was not my argument exactly … Walter Bradford Cannon physiologist, professor and chairman of the Department of Physiology at Harvard Medical School that coined the term “fight or flight response”.

I do agree and embrace the integral distinctions you and @FermentedAgave made here … “fight, flight, freeze and fawn are common ones.” …