On July 10 Steve McIntosh published a position paper on the Institute for Cultural Evolution website titled “A Proposed National Agreement on Abortion.” I’m a fan of the Institute and agree with most of Steve’s ideas. Not this time. SM’s proposal for a national compromise on abortion is a noble effort toward resolving a supremely divisive issue that cannot presently be resolved politically, as he himself admits. However, his approach is seriously flawed in several ways. Despite this, his claim that a “trimester model” can be the basis for compromise is worth looking at for sharpening our understanding of a number of concepts involved in the abortion rights debate. Here is what the model looks like: 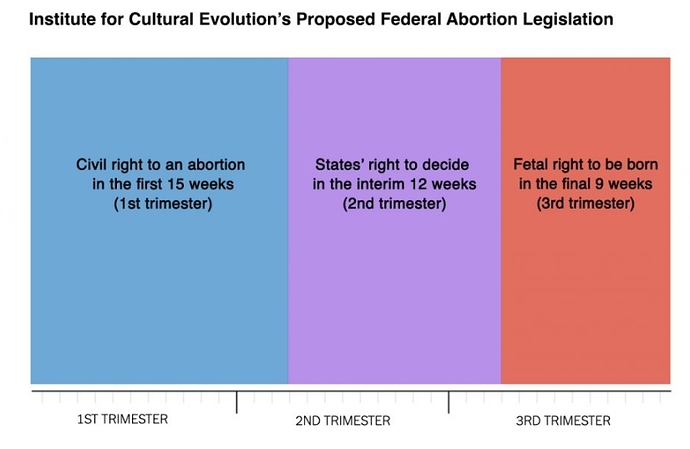 Despite the odds against the project, as an integralist, I support SM’s aim of finding a solution that would be acceptable to all the major stakeholder groups in the battle over abortion rights: traditionalists, modernists, and progressives. However, I have problems with the initial premises of his proposal and with his belief that it actually produces wins that each faction could accept. For those who don’t like lengthy posts, I have divided my response into four parts.

1. Was the Dobbs ruling legitimate?

Early in the essay, SM writes:

“While I would prefer the preservation of the rights interpreted by Roe, I agree with the court’s majority opinion that the original Roe decision itself was a “raw imposition of judicial power.”

SM’s agreement with Justice Alito’s characterization of Roe as a “raw imposition of judicial power” implies that he accepts the legitimacy of this Court and its ruling in Dobbs v. Jackson’s Women’s Health Organization. Many, including myself, do not for several reasons.

· First, Merrick Garland should be on the Court. That he is not is owing to the self-appointment of Mitch McConnell to the position of King of the Senate by which usurped authority he denied even a hearing to Barack Obama’s nominee, Garland, in 2016.

· The three justices appointed by the Trump administration were confirmed by a corrupt process in the Senate. Over the next four years, the McConnell-controlled Senate confirmed three of President Trump’s nominees, all of whom had been selected for their commitment to overturning Roe v. Wade. That’s not how the system is supposed to work.

· All three of those justices lied in their confirmation hearings when questioned about where they stood on Roe v. Wade.

· The reasoning behind Dobbs, written by Justice Alito, has been shredded by numerous legal authorities. See, for example, this interview with health law expert Joanne Rosen.

· Justice Sonia Sotomayor, writing for the three liberal justices, correctly chastised the conservative majority for undermining the legitimacy of the Court with their decision in Dobbs to overturn Roe v. Wade, relegating women to the status of second-class citizens and opening the door to elimination of other basic rights. Let us also note that this is the first time in Court history that a ruling eliminates a right instead of protecting one. Talk about “raw imposition of judicial power.”

If we recall, enslaving our fellow humans was also slowly banned. In 1807 importation of slaves into the US was banned - moral consciousness was developing and increasing. Then slavery was abolished in the US in 1865. Slavery overall is significantly lower in the world today than at any other time in history, with moral consciousness continuing to grow. Eventually Mexican and Latin American human trafficking will be abolished. Eventually African, Middle Eastern and Asian slavery and human trafficking will be eradicated. Progress is being made.

And so too some day abortion will be eradicated from Western Civilization, then rest of the world will eventually follow.

This shows McIntosh’s lack of rational thinking in politics, even though his “National Agreement” isn’t so bad.

Let us also note that this is the first time in Court history that a ruling eliminates a right instead of protecting one. Talk about “raw imposition of judicial power.”

SCOTUS pushed the Abortion issue OUT OF THE COURTS and TO THE STATES, much closer to the voting citizens instead of a “raw imposition of judicial power” that was Roe v Wade.

As an example, Californians can modify their ban after 24 weeks to essentially State funding to kill the baby hows head is showing, just as Colorado and New York have recently instituted. SCOTUS has NO IMPACT, NO ability for “raw imposition of judicial power” on these state rulings. Think about it…

Really these irrational hyperbolic cries of victimization do not serve the discourse.

Please read my critique of SM’s “protection of states rights” section in Part 4 of my series.