Holons: The Building Blocks of the Universe 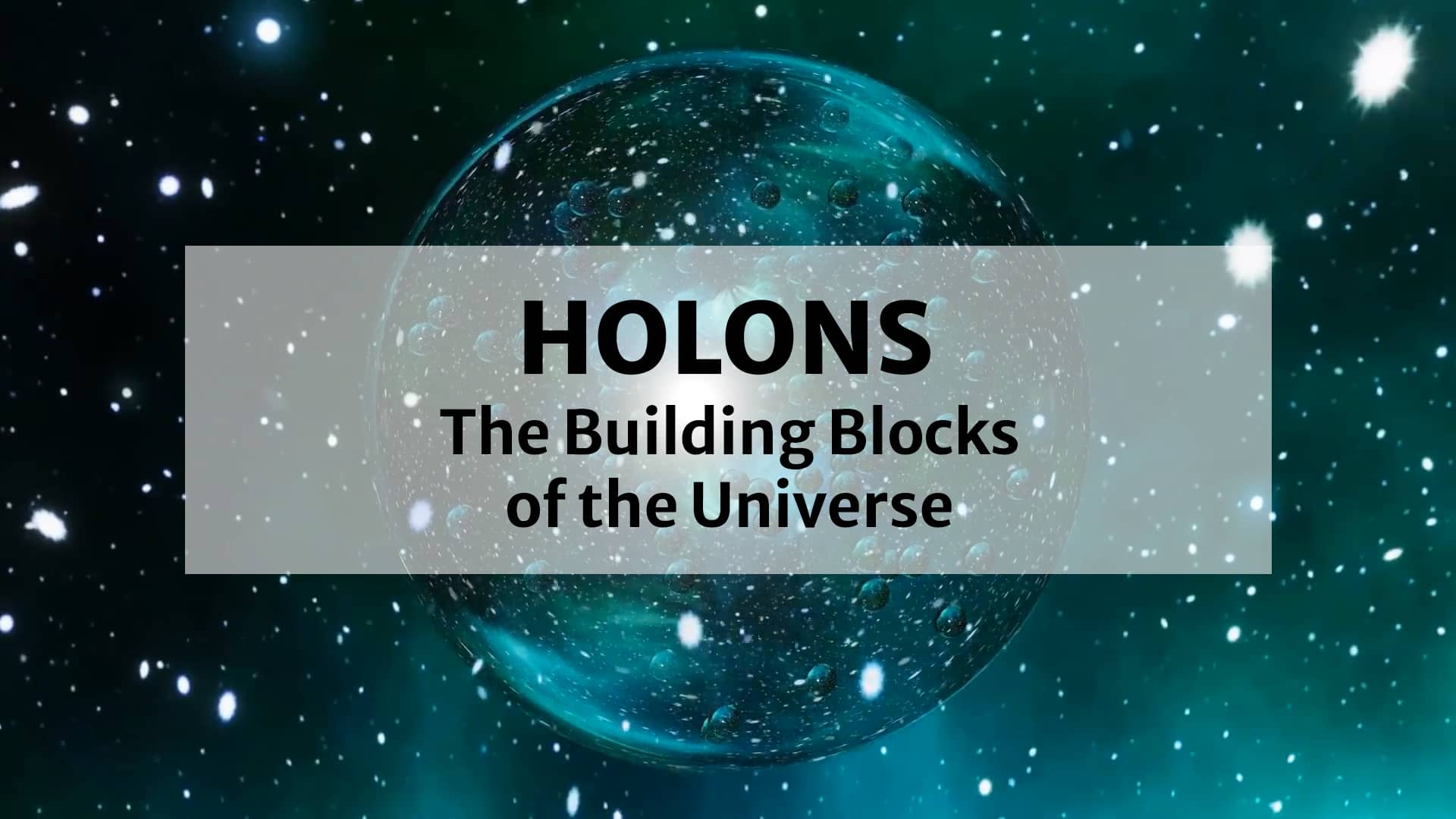 Holons: The Building Blocks of the Universe – Integral Life

Join Corey deVos for this fun, fascinating, and far-reaching exploration of one of the essential cornerstones of integral theory — holons, or the apparently endless series of “part/wholes” that fundamentally compose reality as we know it.

What is it to be a single atom in a crystal? A single ant in a colony? A single starling in a murmation?

Join me for this fun, fascinating, and far-reaching exploration of one of the essential cornerstones of integral theory — holons, or the apparently endless series of “part/wholes” that fundamentally compose reality as we know it.

Accompanied by music, imagery, and animation, this presentation will not help you better understand what a holon actually is (and what it isn’t!) but also how this understanding can radically deepen your appreciation for the natural world, and for all of the other holonic intelligences that exist alongside us on this planet.

This is the story of the universe itself. These holons give rise to the entire “great chain” of evolutionary emergence, a legacy of incremental wholeness that runs from the very first subatomic particles to emerge after the Big Bang, all the way to your own integral mind, right now in this moment.

We should note that, while I emphasize the most rigorous definition of “holons” (any whole/part that possesses its own interior), the word “holon” is also often used generically to describe any kind of whole/part we see in nature. For example, “letters, words, and sentences” — none of which actually have interiors of their own, but are rather describing a nested series of whole/parts that human beings use to communicate their interiors to each other. It is totally okay to use the word “holon” for these kinds of non-sentient components, but we should remember that “true holons” also possess their own interior realities, as I explain in the video.

What is a Holon?
A basic overview of whole/parts as the primary building blocks of the universe.

The Two Drives
Introducing Arthur Koestler, the man who coined the word “holons” in his book The Ghost in the Machine, and his idea that people are subject to two primary drives — to be a whole, and to be a part of a greater whole — and how these drives can sometimes lead to dark and violent places.

A Tale of Two Watchmakers
A parable of increasing integration, showing how the universe uses holons to maximize evolutionary efficiency.

Let’s Invent a Universe!
If you want to make a pie, or an integral metatheory, first you need to invent the universe. Here’s how.

The Secret Life of Holons (The 20 Tenets)
The twenty rules that all holons live by, summarizing Ken Wilber’s 20 Tenets from his book, Sex Ecology, Spirituality.

What Isn’t a Holon? (Heaps, Wholes, and Artifacts)
An overview of the different kinds of holarchy (or nested hierarchy) that exist in the universe.

Inhabiting Social Holons
Taking a first-person inside perspective of various holons in a group, at multiple levels of evolution.

Finding Wholeness
How we can fulfill our drive toward wholeness — and toward being a part of greater whole — in our own lives.

We very much hope you enjoy this presentation! And be sure to keep an eye out for future “integral explainer” videos to come.

Any questions or comments? Let me know below!

A special thank you to @LaWanna for reviewing early versions of this presentation and providing her insightful feedback. Thank you so much LaWanna, your comments were very helpful!

Another special thank you to @Balder, whose endless behind the scenes discussions really helped me hone this piece.

Yet another thank you to @Jeff_Salzman, who also provided warm and valuable feedback for this piece.

Absolutely outstanding work Corey - you have an extraordinary gift for communicating integral concepts in a highly engaging, artful and down to earth / accessible way. It’s a huge challenge to say so much in such a clear and concise way and I think you’ve nailed it. Well done. No doubt this will be reappearing in the Evergreens in the future;)
Much gratitude and very much look forward to more of what you produce.
Kind Regards
Pete

Thank you so much for the kind words Pete, so glad you enjoyed the presentation!

I’m a big follower of Integral Life for many years. This is by far the most compelling and engaging piece yet, I absolutely love your work here Corey.

Is it possible to purchase a complete dvd or download the complete holon presentation…?

Hey Steve, here’s a link you can use to download a high quality version of the video.

Thank you… THANKS from all four quadrants of “my” being…

Fantastic, Corey! We really enjoyed it. What an amazing amount of work.

But I still don’t understand why social holons go from big to small.
Why am I not a part of the universe, but rather the universe is part of me?
My brain hurts …

So glad you liked it Roshana!

When molecules come together as social holons, they create planetary bodies, which are also huge, but not as huge as stars and galaxies.

When prokariotic cells come together, they form the basic “Gaia” ecosystem, which is large, but is only a thin film spread across a planetary body, and therefore smaller.

When eukaryotic cells come together, they form regional ecosystems — which are big, but not as big as the Gaia system that covers the entire planet.

Basically, because greater depth produces less span, there are fewer holons at deeper levels to constellate into social holons, which is what makes social holons “smaller” the further we look up the spiral.

Does that make sense?

As for the universe, let’s be a bit careful here — I would say that we are “part” of the universe itself, but the PHYSICAL universe is, in fact, part of us. Because the “universe” goes beyond mere gross-matter/energy, and also includes subtle and causal realms as well (if you believe in such a thing). But this is why I tried to use specific language — things like galaxies are part of us, not vice versa, but I wouldn’t make the same claim about the universe itself.

Let me know if that’s helpful!

Yes, thanks so much. This is what made it click for me:

The United Nations has a global scale, but far fewer holons participating in the U.N. than in nation-state governments. Etc.

Super job Corey! Creative, clever with some nice imagery. So much information shared! Thanks for all your time in creating this. I look forward to more.

So glad you enjoyed it @Lori_Sandler, and thank you for the warm feedback! I am also looking forward to getting the next videos written, recorded, and produced. And a bit intimidated — there are just so many very big ideas that want to be included in these things, and finding a good way to frame and communicate the ideas can be very challenging!

I can only imagine the challenge and feeling of intimidation! And you’ve got this video well done and lots of encouragement from this community! Much appreciation for all you do to share the integral perspective with us.

I have never posted in a forum, so I don’t really know where to put this. Integral is one the two main influences in my life and I tend to listen to Ken before I listen to anybody else (and re-listen). And…I will make a slight correction. Only somebody who doesn’t know Latin could believe that “Cogito ergo sum” does not mean “I think therefore I am.” That is clearly what it means and I was a Latin major in college, though that was long time ago. “Cogito” is the first person singular present tense of the verb “to think”: hence, I think. “Ergo” means “therefore.” “Sum” is the first person singular present tense of the verb “to be,” hence, “I am.” Any high school Latin student could tell you this. PS His name is pronounced: Stray-chee. I have PhD in English and we studied his more famous brother, Lytton). None of this takes away anything from the brilliance of the holonic view.

Hi Stephen, welcome to the community! I hope you decide to hang out and post more

I see your criticisms/corrections, which seem to be somewhat general and not directly applied to this video. Please let me know if there is anything in the actual video that you think I got wrong, so I can take a closer look and amend any errors in a future installment!

This is so well done, Corey - a true work of love. I’ll watch it over and over in years to come. As far as I’m concerned, you are a giant in your own right when it comes to Integral Theory. THANK YOU.

I really appreciate that, thank you for the warm words @cfilli! I still see myself very much as a student of integral theory, and am genuinely grateful if the fruits of my study can be beneficial to folks like yourself.

Thank you for this wonderful video, @corey-devos. I appreciate the amount of effort necessary to take such a rich and foundational concept and create something that is both artful and educational. Well done! Also, I have to say; I had quite the chuckle hearing what might be my first Integral Theory, evolutionary, or holonic sex joke… parts in 'wholes.’ Aha! I hope it was intentional; otherwise, I definitely read too much into it.