In Pursuit of Wholeness: Making Room for Everything 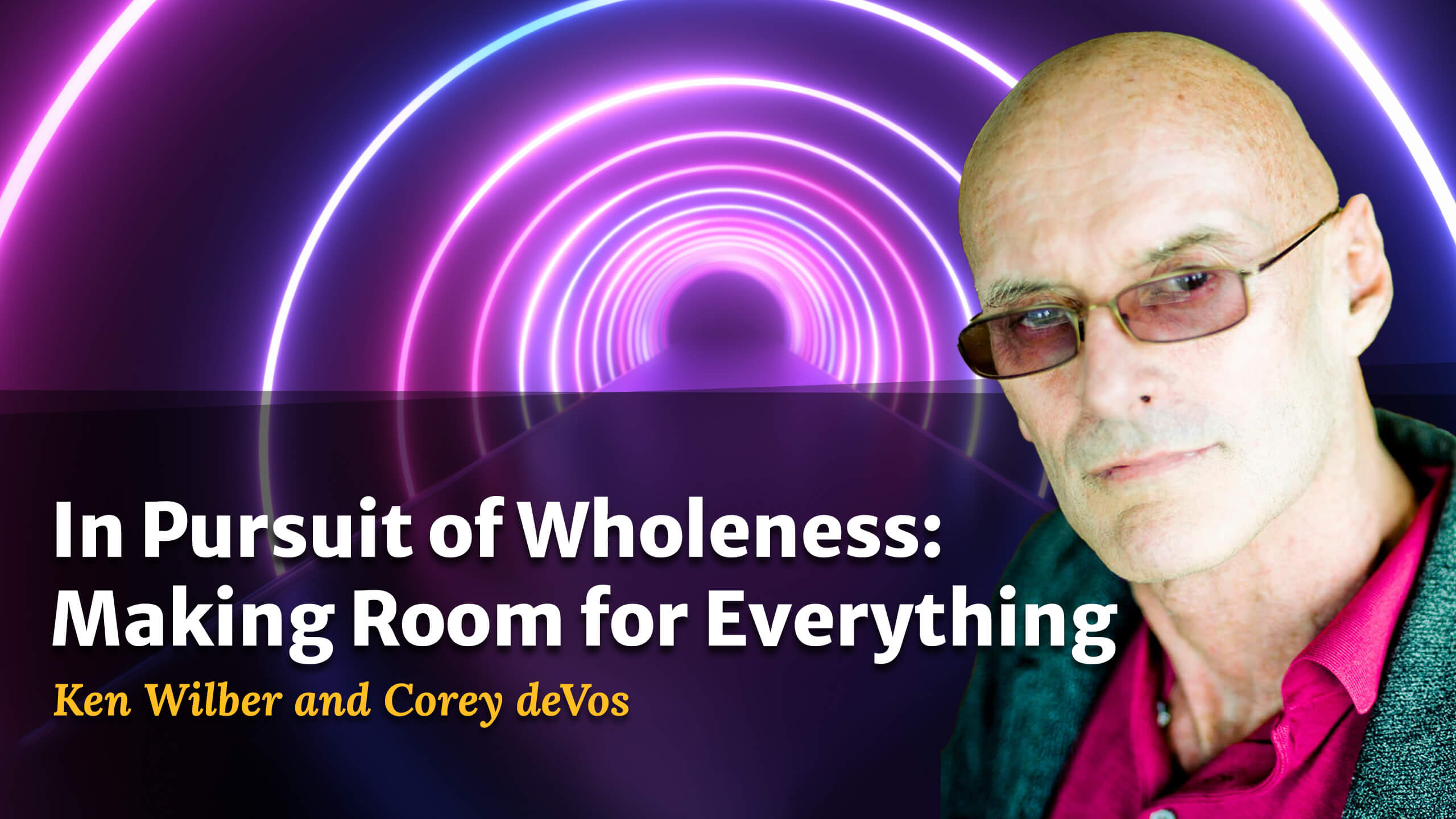 In Pursuit of Wholeness: Making Room for Everything – Integral Life

Today we are going to talk about one of the most important and central ideas in all of integral theory: holons, which are wholes that are simultaneously part of other wholes.

This notion of holons — the idea that the universe is fundamentally made of whole/parts within whole/parts within whole/parts, turtles all the way up and turtles all the way down — this isn’t just important in a theoretical or philosophical sense. Understanding holons also helps us make better sense of the world that we live in, and our inner worlds as well. It’s immediately relevant to any number of culture war issues that we see these days, from abortion to immigration to vaccination to the various rights and responsibilities we have as national and global citizens. And it’s an idea that helps us recognize the many different kinds of “wholeness” we can see in the universe, and that we can pursue in our own lives — in our interiors and in our exteriors, both personally and collectively — and helps guide our own growing up, waking up, and cleaning up process.

NOTE: In our previous episode of The Ken Show, Ken gave us a stunning overview of his work, taking us through a summary of individual and social holons, the stages of development, the four quadrants, and the eight zones of integral methodological pluralism. Anyone who is looking the basics can check out that summary, “From the Big Bang to the Eight Primordial Zones”.

Written and produced by Corey deVos

Part 1 — Making Room for Everything

Ken introduces the topic by describing the major themes of his latest book, Making Room for Everything, recently submitted to Shambhala to be published in 2023. This new book works directly with these different kinds of wholeness, and the different ways we can pursue wholeness in our 1st-person experience, in our 2nd-person relationships, and in our 3rd-person work and environments. Watch as Ken describes how the paths of Waking Up, Growing Up, Cleaning Up, Opening Up, and Showing Up all lead us to different kinds of wholeness.

Part 2 — Perils on the Path to Wholeness

Ken’s integral holonic theory is tremendously relevant for where we currently are culturally and socially. Not only in terms of the specific issues mentioned earlier (abortion, immigration, vaccination, etc. — all of which we’ve talked about in previous episodes), but also in terms of the overall regression and re-emergence of totalitarian thinking that we’ve been seeing in the over the last 10 years or so, both here in the U.S. and around the world.

When Arthur Koestler coined the word “holons” in his book The Ghost in the Machine, he was very concerned about people joining regressive communities as a way to seek a sense of wholeness that they were lacking:

As Koestler saw it, the desire to become part of something greater than ourselves can often lead us to participate with social systems that are in fact far less than ourselves, because we often choose systems that were created by lower drives from more primitive parts of the brain – more primitive subholons within us — namely, drives to oppress and dominate other people.

In Koestler’s view, if we do not have an accurate understanding of how whole/parts emerge – and if we do not know how to navigate the great chain of whole/parts that have already emerged in nature and in human society – then our own contradictory struggle to simultaneously be a whole, and to be a part of a greater whole, can lead us down some very dark paths.

Why is this so important? Well, just as Koestler observed, our drive to be part of something greater than ourselves can easily mislead us into becoming members of something that is far less evolved, and far more dangerous. We confuse two different kinds of drives – the drive to be a holonic part of a greater whole, versus the drive to be in community with other wholes who are similar to us.

This brings us back to the difference between ‘growth hierarchies’ and ‘dominator hierarchies’. One of the common features of totalitarian regimes everywhere is that they co-opt the language of growth holarchies and twist it into justification for dominator hierarchies, convincing people that either they themselves, or their ideology, is the “higher, greater whole” that we should all want to be part of. So let’s maybe try to keep an eye out for that, since we seem to be seeing a bit of a resurgence of this kind of thinking these days.

Part 3 — The Universe: Heap or Whole?

In his book “Science and the Reenchantment of the Cosmos”, Ervin Lazlo writes:

“The universe is not a world of separate things in events, of external spectators in an impersonal spectacle. It is an integral whole. Unlike the disenchanted world of classical physics it is not fragmented into material things in the disjointed domains of life and mind.“

“The current finding of the universe is wholeness is the fruit of sustained investigation, based on observation and tested by experiment. It provides an entirely different image of the world than the mechanistic, materialistic and fragmented image we were taught in school. The cosmos that is connected, coherent, and whole recalled an ancient notion that was present in the tradition of every civilization; it is an enchanted cosmos.”

So the main question here is, would we consider the universe itself to be a whole, or is it a just heap, a chaotic pile of wholes, artifacts, and social holons? And if we agree with Lazlo that the universe is indeed a whole, and not a heap, would that mean the universe has its own interior, which many might label “God”? Would it mean that the universe exists in a community of other universes, since no holon exists in isolation and all wholes are also members of a collective? Might something like brane theory or multiverse theory help us account for the “community of universes” that our own universe would be a member of?

One thing I’ve always appreciated about holonic theory is that its particular version of panpsychism (what Ken calls “paninteriorism”) — that all wholes have both an exterior dimension and an interior dimensions — is by far the most elegant and even aesthetically-pleasing argument. And also the most simple, because it doesn’t require any exterior “mechanisms” to produce interiority in the first place, only mechanisms to deepen that interiority as matter and mind continues to evolve together. And because it doesn’t diminish consciousness as a byproduct of physical processes — rather, holonic theory makes consciousness as primary to the universe as it is to our own felt experience, right now. After all, as Descartes pointed out, all objective phenomena in our awareness can be doubted. But we cannot doubt our own conscious awareness itself, which is ultimately the only genuinely self-evident “truth” we’ve ever known.

Part 5 — Could Stars Be Organisms?

Several episodes ago we talked about the different kinds of subtle fields and energies associated with different kinds of holons, and even social holons. One question I have is whether it is possible for non-living matter (atoms, for example) to form “living systems” that are capable of generating subtle energies that the atom itself is incapable of producing? Is it possible for social holons to display properties that are so much more complex than its individual members, even to the point of generating/conducting higher forms of subtle energy than its individual holons can? Might this be why we see such staggering complexity in things like ant colonies, which no individual ant is capable of? Is it possible that a social holon can be magnitudes “more intelligent” than the individual holons that compose it?

For example, let’s entertain a science fiction scenario where we eventually learn that stars are truly “living systems” that share many rudimentary properties of life — nutrition (atom-smashing), respiration (solar cycles), excretion (electromagnetic and particle radiation), growth (life cycles), death and reproduction (both via supernovae). Could stars be something like atomic organisms — giant single-cell proto-organisms made of plasma that eat atoms and excrete light?

And just like the gravity field a star generates will influence the emergence and physical self-organization of planetary bodies in its system, could stars generate an etheric subtle-energy field, which is commonly associated with living processes, and which would also influence the emergence and self-organization of living bodies in its system? Would this would make the probability of primordial life emerging throughout the universe much more likely, all feeding on both the electromagnetic and etheric energy of its parent star?

Is it possible that the living universe kickstarts itself right from the very beginning — that when we look at a galaxy in the night sky, we’re not seeing a collection of dead lights, but a community of living organisms?