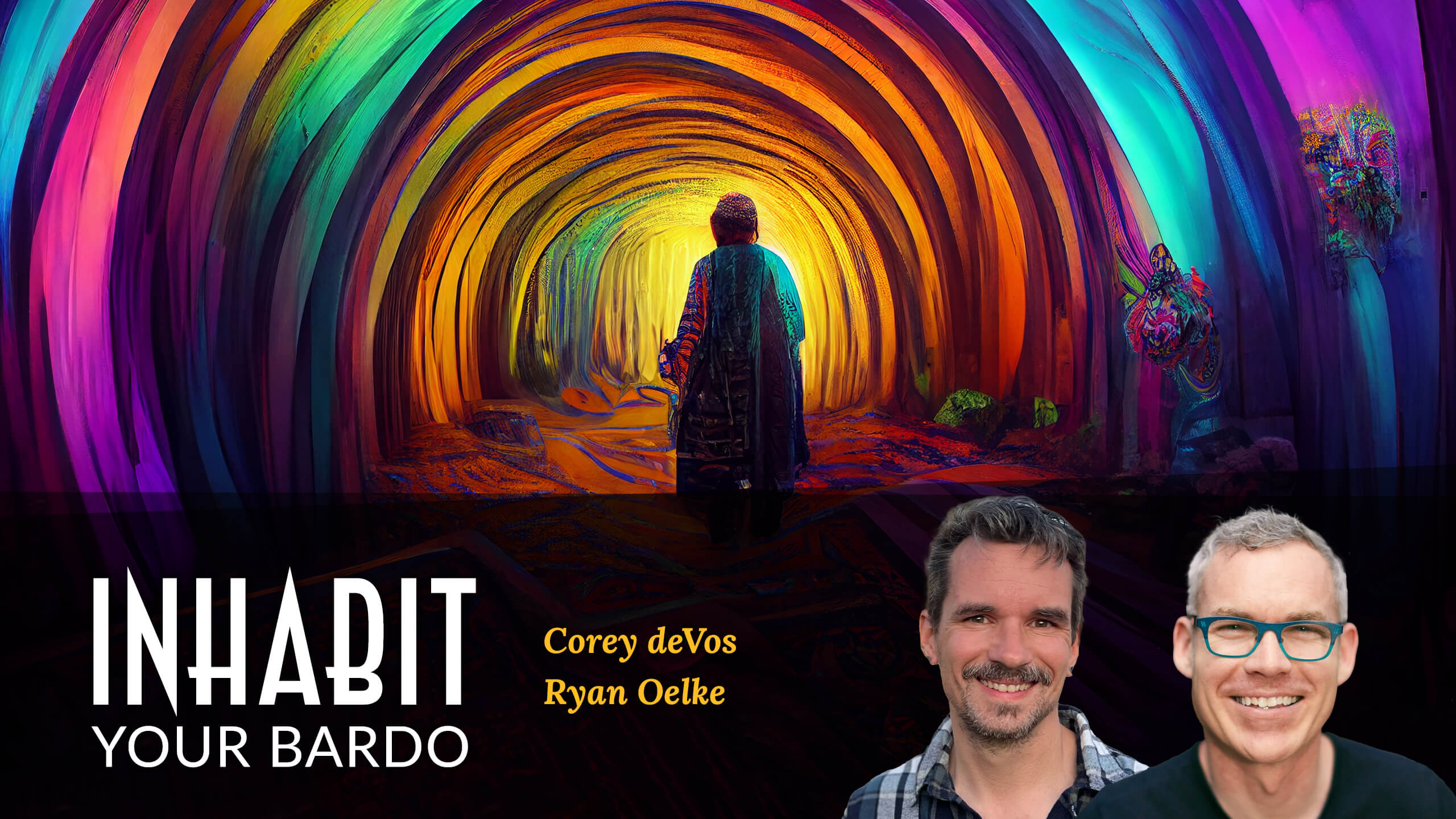 In the Buddhist tradition, the “bardo” refers to the transitional state between lifetimes, a liminal state (or series of states) between death and birth. There are no shortage of practices designed to help us prepare for this ultimate transition — to...

In the Buddhist tradition, the “bardo” refers to the transitional state between lifetimes, a liminal state (or series of states) between death and birth. There are no shortage of practices designed to help us prepare for this ultimate transition — to “practice dying”, as Plato instructed his disciples to do. As Ken Wilber says,

“All spiritual practice is a rehearsal—and at its best, an enactment—of death. As the mystics put it, ‘If you die before you die, then when you die, you won’t die.’ In other words, if right now you die to the separate-self sense, and discover instead your real Self which is the entire Kosmos at large, then the death of this particular bodymind is but a leaf falling from the eternal tree that you are.”

However, this is not a conversation about death. It is a conversation about life. It’s about recognizing the fact that every moment is a bardo, a transition from one state of being to another state of being — and within these ubiquitous transitions there are opportunities to transcend the karmas of our conditioning, and to channel new kinds of creativity into the world.

This discussion is an open-hearted celebration of transition, an appreciation of the fact that there is never any real solid ground beneath our feet, because nothing is truly solid or lasting in this manifest world. We know that, in this reality, “energy cannot be created or destroyed, only changed” — which means that only the changing is real. Creation and destruction, birth and death, are illusions arising from the temporary semi-stable patterns of organization that forever exist in their own perpetual state of transition. The only truly permanent ground we can ever hope to find is the Ground of Being itself, which never actually enters the stream of time to begin with, but nonetheless infuses and envelopes the whole of manifest reality.

We hope that this conversation will help you participate more consciously with the ever-changing flow of your own life, and to find new ways to harness the creative engine at the very core of this transitional moment right now.

We hope you enjoy this discussion! Let us know what you think in the comments below.

I’ve always annoyed myself with that “everyone is right,” or “partially right,” aphorism to which Ken Wilber and some of the Integral cadre has laid claim.

The “everyone is right” proclamation does lend support to Integral Theory, and it is a feel-good affirmation for anyone who needs it, but is it an accurate thing to say, since such a statement also lends support to delusional thinking, dysfunction, pathology, etc. (I suppose all of which, by virtue of their existence, like cancer cells, are “right” and have a “right” to be here)?

I think this is actually a really important point Sidra. Because the unspoken part of that phrase, “everyone is right”, is that simultaneously “everyone is wrong”, and therefore there are very few perspectives that would be 100% included in the integral embrace exactly as we find them.

As I tend to frame it, “everyone is right” speaks to one of the three major legs of integral thought — non-exclusion. But if we have ONLY non-exclusion as our primary virtue, things get real swampy real fast, and now you have to pretend that you are able to reconcile views that are, in the end, irreconcilable. (However, it’s important to note that “non-exclusion” is somewhat different than, say, “inclusion”, because the idea is to be inclusive of QUALIFIED perspectives across all four quadrants/eight zones, which is why we don’t need to include things like phrenology, leeching, eugenics, etc.)

On the other hand, “everyone is wrong” (which is another way of saying “true, yes, but also partial”) speaks to the second leg of integral thinking — enfoldment. Now we have everyone’s “truth” on the table, let’s start folding them together, which requires a great deal of discernment and epistemic humility as we separate the wheat from the chaff and bring paradigmatic truths into a wider multi- or meta-paradigmatic embrace.

So, in your cancer example — we “include” the cancer by exterminating the cancer. That is, what we are including is the deep structure of cancer itself — the fact that cancer exists, what causes it, what cures it, etc. We aren’t pushing cancer into the shadow, we are including it as its own “wicked problem” on both individual and collective scales.

Which is why oftentimes to “transcend and include” — such as transcending and including cancer — is to “negate to preserve”. We negate the cancer cells in order to preserve a healthy and functional organism. And I think this is the critical frame, whether we are talking about cancer in our biology, in our psychology, in our social systems, or in the noosphere itself. The very act of “including” or integrating our shadow is what simultaneously extinguishes the shadow.

All of which is to say, I think that “everyone is right” is a really great first step into the integral mind. It’s an acknowledgment that a) I have something important to offer, b) my own perspective is limited and therefore I need to be inclusive (or non-exclusive) of other perspectives as well, and c) there are a great number of methodologies that we use to disclose different facets of reality, and none of those methodologies alone are capable of presenting a full view. Plus it’s a really great way to build a bridge to the Green altitude, which obviously loves the idea and spirit of inclusivity.

But then there’s that momentous leap from non-exclusion to enfoldment, from “true” to “partial”, from “everyone is right” to “everyone is wrong”. And we really need to manage this polarity carefully, because going too far in one direction results in naïveté and narcissism, while going too far in the other direction brings us to nihilism and cynicism (which are often also products of narcissism).

I hope this is helpful, because it really is such an important issue that you raise!

One of the best hours I’ve just spent listening to this talk between Corey and Ryan on the ideas of grammar, transitions of our own realizations, Integral Dharma, constantly changing identity, and a heartfelt sharing as Corey speaks from his experience as a father, beneficial!