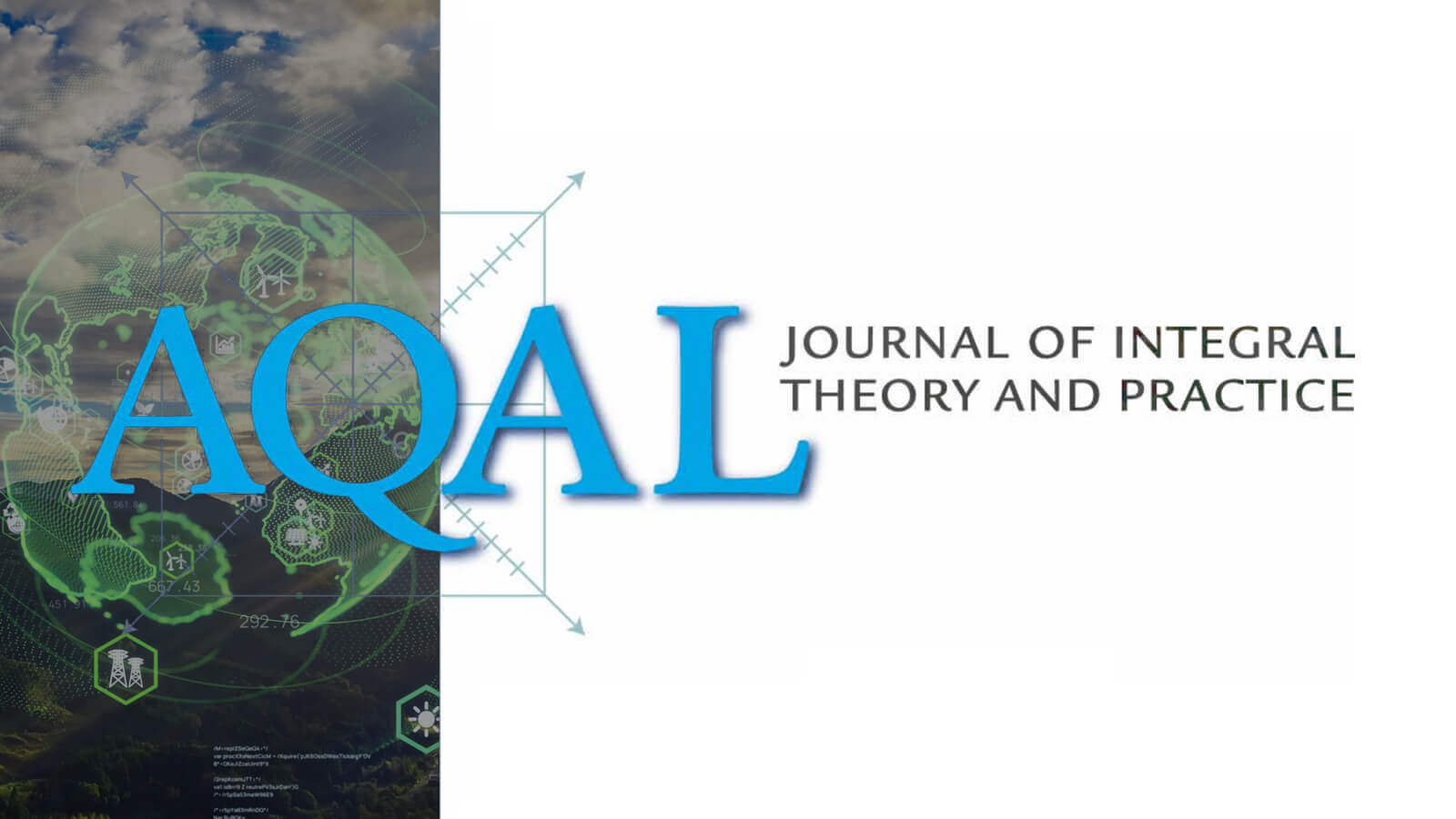 This is a two-part paper that offers an overview of Integral Sustainable Development, explaining the rudiments of a practical framework that integrates the crowded conceptual and operational landscape of sustainable development and enables...

This is a two-part paper that offers an overview of Integral Sustainable Development, explaining the rudiments of a practical framework that integrates the crowded conceptual and operational landscape of sustainable development and enables practitioners to 1) identify the full-range of needs and capabilities of individuals and groups, and 2) tailor the specific developmental response that fits each unique situation. The fundamentals of this framework are four major perspectives (explained in part I) and three waves of natural evolution (part II). The framework maps out and integrates human consciousness and behavior, culture, systems, and the physical environment. Drawing upon cross-cultural and transdisciplinary studies, as well as data from field researchers, this framework is shown to be vital for a comprehensive and accurate approach to addressing our social, environmental, and economic challenges. Included are introductory analytical tools for practitioners (parts I and II), as well as synopses of current sustainable development initiatives—by organizations such as the UNDP HIV/AIDS Group, and UNICEF Oman—which use the Integral framework (Appendix).

Never before in history have we had access to so much information. The knowledge, understandings, and experiences from every sector of society and every human culture (past and present) can now contribute their part in solving the complex puzzle of existence. At the same time, never before in history have we faced such complicated and pressing social, environmental, and economic challenges. Now, more than ever, we need action based upon the deepest possible understanding of our global situation, the stakeholders involved, and ourselves.

Love it! Let’s get that Conveyor Belt built!

Corey - I’d challenge you to really think about these three words used together.

So what is it behind the American mindset making economic development as some kind of sacred cow? The answer is that our modern form of Capitalism is unsustainable without Growth (falsely equated with development). We take something that is not sustainable, and because we are addicted to it, as a culture we are still in the denial and bargaining stages. We either deny that sustainability is necessary, or bargain that growth can be sustained, when it cannot. As a planet, we are already past the point when even zero growth is sustainable. The only way for humanity to continue on earth for another 1,000 years is to reduce our population and impact on the earth. If we just take a look at two of our most basic needs - food and drinkable water - further development reduces the chances higher life will survive at all. Eight billion people cannot all eat steak dinners. It’s mathematically impossible from simply an acreage point of view. Eight billion people cannot all have personal vehicles, and eight billion people cannot all live in a single family house in the suburbs. All this framework of economic development is mathematically impossible.
Yet if we want to survive as a species and stop making cars, stop building houses for individual nuclear families that only last 50 years or less, and move all 8 billion people to a plant based diet - the global economy will collapse.

When those are in line, the economic system becomes irrelevant to the individual, and as more individuals join stage 2 or 3 they will form communities who will then be able to interact in another form of economic system that will be sustainable.

First I should mention that this is not my title, it is the title of this academic JITP paper by Barrett Brown.

And I am wondering if you think the paper itself adequately addresses your concerns! Barrett seems to agree with you that taking an economic view alone is too narrow an approach. And yet, because people are inherently social beings, and there will always be some form of social autopoiesis (self-organization) that creates both material and conceptual systems of exchange, we will always have something like an “economy” in our lower-right quadrant. The trick, as I think you may be pointing out, is that our economy should be working for us — which means for our interior health as much as our exterior physical and environmental health — rather than vice versa.

It is my hope that articles like this can help us take a few steps back and reassess our current neoliberal capitalist system a bit more clearly, which is indeed based on the sorts of unsustainable “extractive capitalism” that we were discussing in another thread, which tends not to take a long view at all in its development, focusing instead on maximizing short-term quarterly profits for stakeholders while forcing taxpayers to subsidize their losses (such as America’s largest employer, Walmart, relying on the taxpayer welfare system to keep its employees fed, clothed, and housed).

Integral Sustainable Development practitioners recognize that the more dimensions of reality a SDv initiative takes into account, the greater chance it has of becoming a long-term, sustainable solution. For example: a solution based on economic analysis alone is less sustainable than one that incorporates economic, ecological, and social understandings; this, in turn, is less viable than a solution that also includes psychological, cultural, and religious perspectives. Thus, Integral Sustainable Development practitioners are guided by the simple commitment to include as much knowledge about reality as possible, in the most sophisticated and pragmatic way available.

And I am wondering if you think the paper itself adequately addresses your concerns!

I’m trying to find your link to the paper but can’t see it.

Is this it? I googled it. It is written by Barrett Brown

Ah - reading it now I see you cut and pasted from his paper and those are not your words, but his (or hers).

And I am wondering if you think the paper itself adequately addresses your concerns!

Yes, reading it he does address differing views of sustainability.

Basrrett Brown:
Sustainable Development is that with a large enough perspective, everyone is partially right: all
definitions address an important dimension of reality, each approach focuses on a necessary
area of SDv, and all justifications are valid within their context. This inclusive approach helps
dissolve fragmentation in theory and practice

I would add and / or disagree that some definitions, while partially right, should also be evaluated in better / worse and stated as inferior / counterproductive when they are. He doesn’t actually say some ideas are better and some are worse, so I’m not sure if I should infer from what he isn’t saying if he is from the “all contributions have equal value” camp.

IDK - if I’m honest I don’t agree with the “everyone is partially right” thing. I can say it only when I have my fingers crossed. Deep down I feel that some ideas are just plain wrong and letting them believe they are partially right can be a bait and switch technique (or pace and lead or other better sounding phrase)

But yes, when the author actually gets into the paper - by the way - how do I petition Ken to add into his theory something about getting to the actual point faster and more clearly and that using 10 pages instead of 1 is a symptom of unbalanced Orange? lol

Barrett Brown:
Innumerable forces emerge out of every stakeholder’s interior that directly impact any
approach to sustainable development. These forces influence both the cause and cure of
systemic imbalances. Thus, mindfulness of individual consciousness (belief system, mental
model, motivations, etc.) is vital when attempting to address all the major influences on a
sustainable development initiative.

Rather than fostering dependency and the expectation that exterior entities
(NGOs, government, etc.) would solve the community’s problems, which was
particularly the case in Jiquilisco Bay, the Integral framework made room for
“self” in the process of community-directed development. We did not utilize
self-development methodologies as described in developmental psychology but
instead created conditions for personal growth, self-empowerment and selfreflection throughout all phases of the project. The domain of “I” arose during
the house-to-house visits, where community inhabitants discussed their lives,
families, every-day activities, thoughts and perspectives, and our research team
cultivated openness to truly hear what was said. The Upper Left quadrant of
Wilber’s AQAL [all-quadrants, all-levels] framework was also present in the
focus groups, in which we created a trusting and expansive space in which
participants shared inner reflections. As a practitioner, my own selfdevelopment practices (of yoga and meditation) helped to foster my own
expanded awareness, to be clear of my intention and to be receptive to
intuition regarding the project… Including the domain of “I” in development
enables individuals to better understand their current and potential role in
effecting positive change in their community or society, as well as their
individual impact on each other and the environment.

Oh, I see I forgot to include the link in the post. I just edited it, you should see it now

I skimmed the paper, trying to make sense of what the author is trying to achieve, unfortunately I didn’t get it. When looking through the references, I got worried when I didn’t find people like Jeffrey Sachs or Kate Raworth mentioned, it mostly mentioned integral sources.

I am a practitioner and academic articles are mostly over my head. If it doesn’t have a concrete practical value with concrete practical examples, I don’t get it. Here, it worries me that some of the people I connect most with discussing what sustainability is, weren’t mentioned. It worries me because academical structure without root in reality isn’t going to be of much use (unless we imagine that we have decades and decades to get there). But ok, academic papers are targeting the 1 % of the 1 %, so it’s a tiny fraction of people speaking to another tiny fraction, and sometimes, something useful actually emerges from it.

For me, it would have been more helpful to look at different definitions of sustainability and sustainable development and then analyse it through an integral lens to see what was missing. But maybe this will come later?