Putting the "Art" in Artificial Intelligence What is art, at its most fundamental level? This is one of those perennial questions that we have been asking and re-asking at every stage of the human journey, from the first cave drawings all the way to the emergence of sophisticated artificial...

What is art, at its most fundamental level?

This is one of those perennial questions that we have been asking and re-asking at every stage of the human journey, from the first cave drawings all the way to the emergence of sophisticated artificial intelligence algorithms like MidJourney that are once again blurring the lines between art, beauty, meaning, and perspective, forcing us to find new ways to answer this timeless question.

Watch as Ken and Corey take a fun and fascinating look at the intersection between art, semiotics, and technology.

There has been a lot of buzz lately — and a bit of consternation — about a series of new artificial intelligence art platforms that allow people to input a series of prompts, and the algorithm then reconstructs images based on those prompts, often leading to some interesting and occasionally stunning pieces of art.

For example, this image, which just won first place at the Colorado State Fair art competition, resulting in a fair bit of controversy among artists and art enthusiasts: 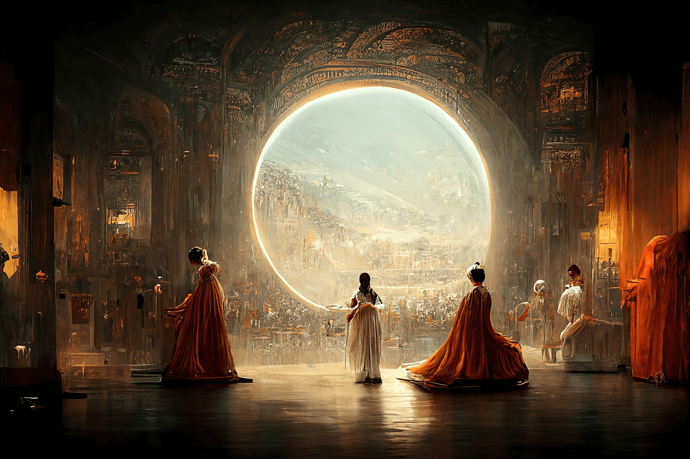 I myself have had a lot of fun playing with these platforms, and have even been using one in particular (MidJourney, the same software that was used to create all of the images above and in the episode) to help design imagery for many of my recent Integral Life discussions.

It is an interesting experience, playing with these platforms — you input your prompts and parameters into a text field, hit “enter”, and wait for the AI to respond with an assortment of images. The experience actually feels somewhat dialogical, as though the art that’s being generated is emerging from a conversation between man and machine. But of course, there is no ghost in that machine, no real interiority or consciousness behind the curtain, and therefore no genuine meaning is being directly transmitted through the art. Whatever meaning we might see there is being generated by the user and/or observer, not by the machine itself. The images being produced may be beautiful, but I am not sure they become “art” until that beauty is then enacted and inhabited by a perspective.

Which is how art has always worked, more or less — a sunset by itself is beautiful, but it’s not art — at least not until someone comes along, frames it with their perspective, and takes a picture. 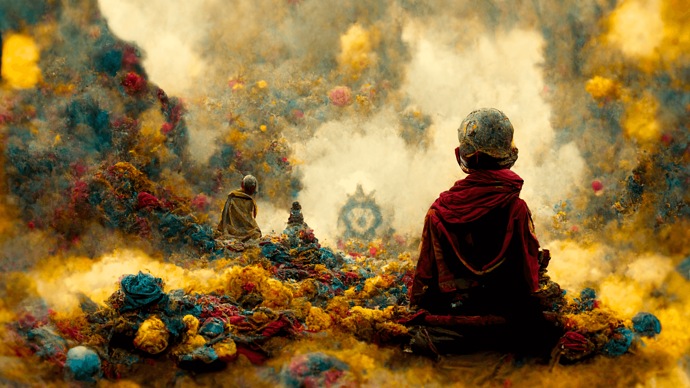 AI is simply another new artistic tool people use to help augment their creative process, and there are always any number of luddites waiting in the margins to immediately denounce those tools as inauthentic. As always, it comes down to how we use those tools — are we merely substituting our creativity with convenience, or do we allow those conveniences to bring us to new levels of creative expression that would not have been possible before?

At the same time, there really is something a bit different with this kind of algorithm-generated art. It’s not quite the same as a new kind of paintbrush or musical instrument, because in many ways the tool itself is generating the artwork — guided not by an individual artist’s hand or carefully cultivated talents, but rather by the user’s verbal prompts, combined with the software’s neural network that is compiling and amalgamating any number of images and artifacts that already exist on the internet. In a sense, these algorithms are bridging the individual consciousness of the user with the collective creativity of the user’s larger community, culture, and society, while using a number of LR aesthetic heuristics (composition, symmetry, color theory, etc.) to generate an image that human beings can then recognize as “beautiful”.

All of this raises some fundamental questions about the nature of art, consciousness, and technology, which can probably only be answered in a satisfying way by taking a more integral look:

Ken and I are both hopeful that questions like these will lead us toward a greater understanding and appreciation of art, its purpose, and its execution.

THE RELATIONSHIP BETWEEN “ART” AND “BEAUTY”? 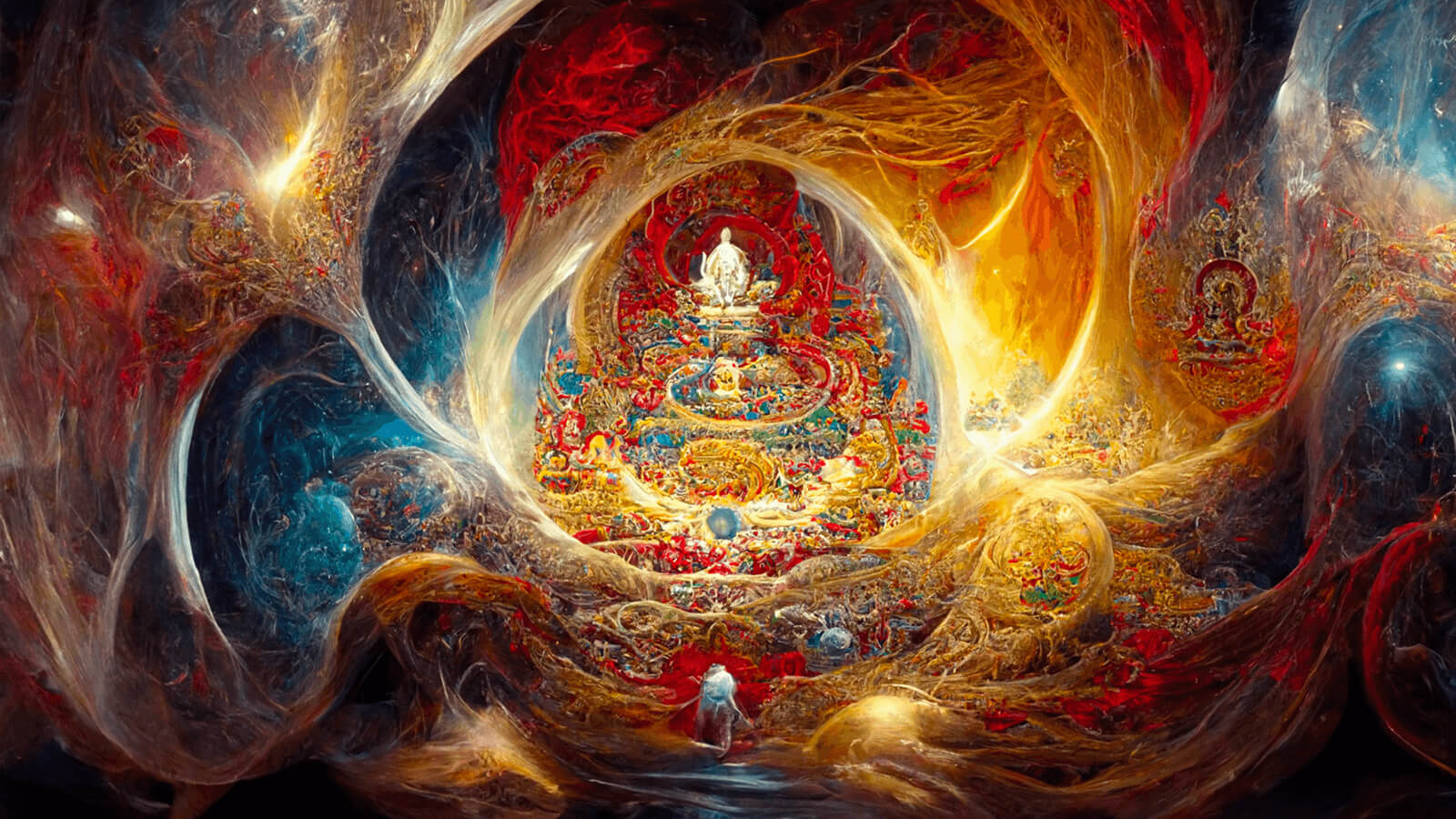 We often like to discern between one’s “aesthetic intelligence” (our capacity to perceive and enact beauty) and one’s “creative intelligence” (our ability to create beauty through an endless variety of artistic expressions). Both of these lines of development are critical as we consider the important differences between beauty as an inherent quality of the universe, and art as a deliberate creative effort.

I used the example of a sunset earlier — a natural phenomenon that results from the self-organization of mass-energy, which often generates incredible beauty but is not itself an artistic expression, because there is no artist on the other side who is deliberately creating or communicating this beauty. (Of course we can always take a “Spirit-in-2nd-person” view, recognizing a personal God as the ultimate artist who is creating the entire universe at every moment – but it’s perhaps better to keep this conversation focused on artifacts produced by lowly holons like you and me.)

The sunset itself is not art. But the moment I frame the beauty with my perspective, it becomes art.

It seems the math is actually fairly straightforward here:

As Ken says, art is “anything in a frame”. It is beauty reflected through a perspective, a point of view, a frame of reference. 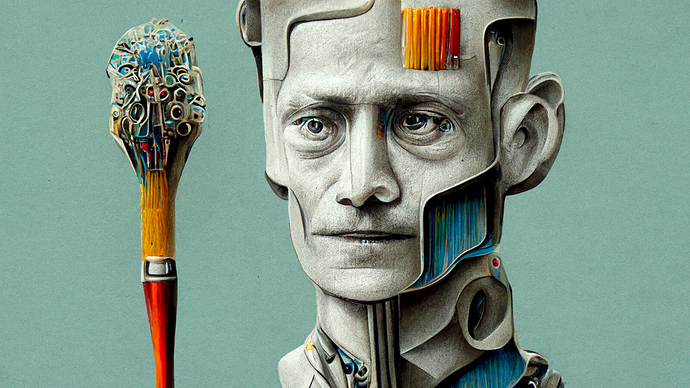 I think this is one of the most interesting and challenging questions being raised by AI-generated art — can something really be considered “art” if there is no artist’s intent to be found?

One of the features of postmodern art is that it almost entirely does away with “artist intent” altogether. Original intent is irrelevant — all that matters is the observer’s experience of the artwork, and what that artwork may represent to a particular culture or subculture. Which makes a certain amount of sense, as we still have access to wondrous works of art from history that continue to generate meaning and stir something deep inside of us, but whose original intent has long since been lost to the passage of time, despite some universal signifiers (body language, emotional states, etc.) that still speak directly to us today.

Of course, an integral analysis of art does not exclude artist intent as the postmodernists often do — but neither does integral make intent the only means of understanding art. Rather, the meaning of an artwork can be found in all four quadrants — in the artist’s intent, in the content of the artwork itself, in the response of the observer, and in the total social conditions and circumstances surrounding the artist and artwork.

But what if the artwork is being created by an artist that does not possess anything like an “intention”? This is the curious question we now face in the era of AI-generated art. 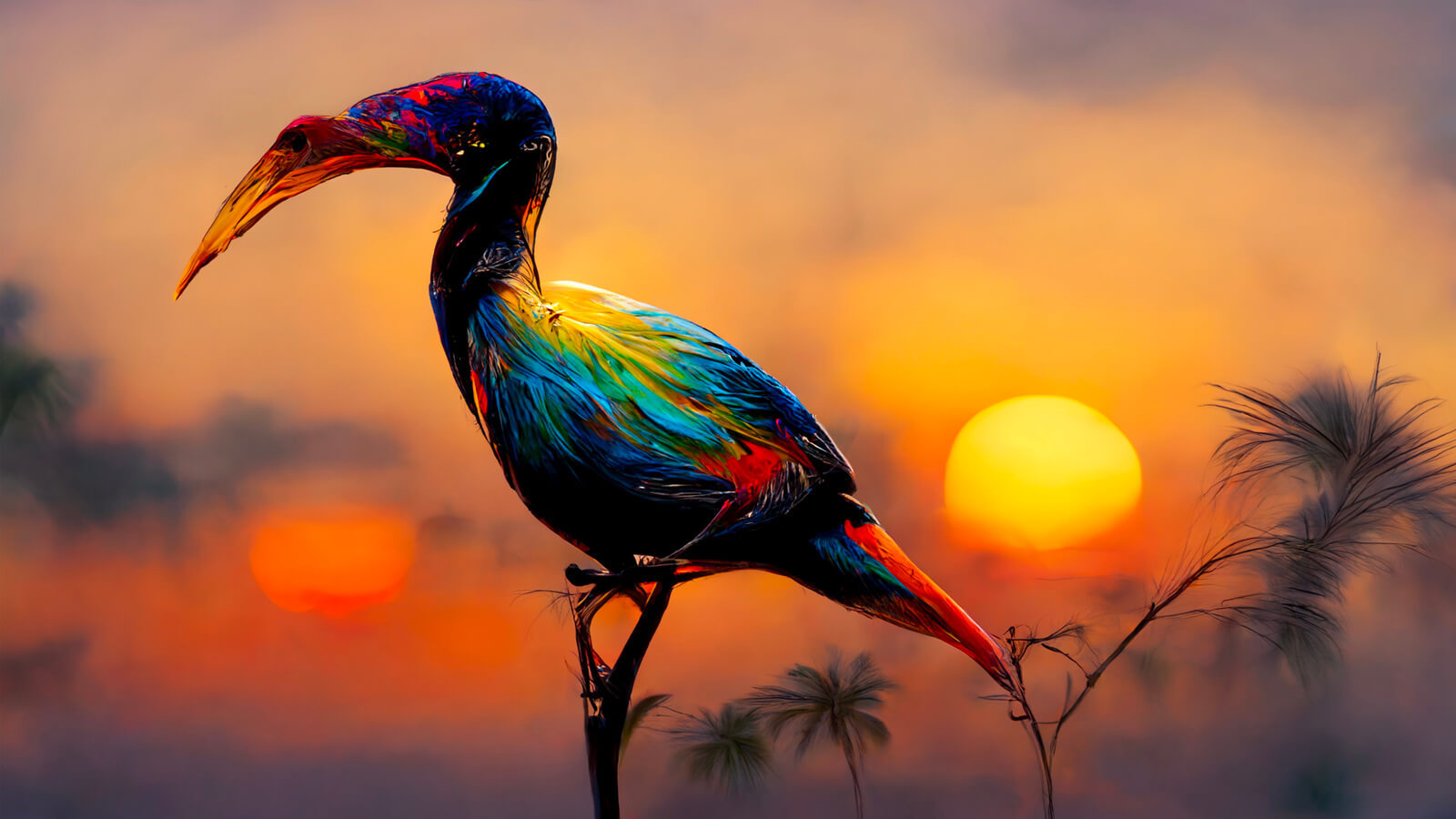 I often think of certain tropical birds, whose plumage is adorned with vibrant and beautiful colors, and who then compose a series of songs and intricate mating dances in order to communicate their beauty and attract a mate. This example seems to get to the core differences between beauty and art — the bird’s feathers are beautiful, but they are not “art”, they are simply part of that bird’s unique kosmic address. However, the song and dance that the bird performs IS an artistic expression, a communication of the bird’s beauty and kosmic address within the 2nd-person space it shares with other birds in its environment.

Which makes art an essential mechanism of what Ken calls the “Miracle of We”. We choose a set of exterior signifiers to communicate a particular referent in our own interior consciousness, reaching out across the infinite void of our own absolute subjectivity in order to make contact with another subject. And then that signifier lands somewhere on your own subjective horizon, where you approach it, examine it, and attempt to decipher its meaning. If this signifier successfully corresponds to a similar interior referent within each of us, a new shared reality emerges between us. This is truly a miracle, I think.

Another example: Ryan Oelke and I recently did a show together called Inhabit: Your Bardo, where we talked about the realization that every moment is a transition, and an opportunity to transcend the karma of our conditioning and add a bit of new creativity. So I had a particular theme in mind — traveling through a bardo realm — and I wanted to generate an AI image to help illustrate this theme. And after a bit of trial and error, I ended up with this image: 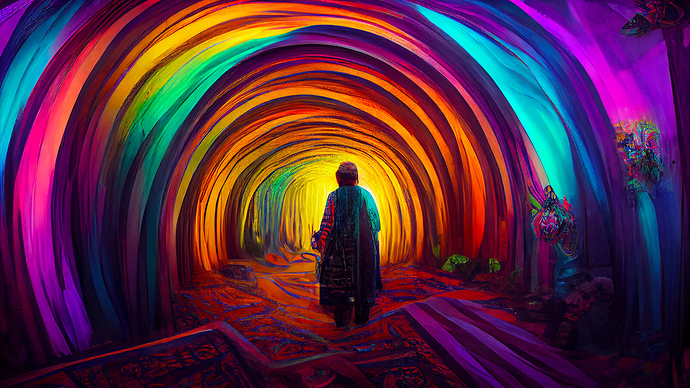 And while making the image, something interesting happened. One of the things we discussed was the idea that, in this world of form, there is never any real “solid ground” beneath our feet, we are constantly shifting from one temporary ground to another — all substitute gratifications for the only permanent ground we can find, the Ground of Being itself. When I saw this image, right away I noticed what appears to be a series of carpets piled on the floor, which I immediately took to symbolize this collection of temporary patches of ground that we cling to in the relative world. I didn’t enter any specific prompt that would have resulted in those carpets, but I immediately resonated with the image, noticing how the AI gave me a surprising signifier for a very particular referent in my own head, a memory of this particular segment of my dialogue with Ryan.

But that meaning was not generated by the AI, it was supplied by me — the image was an accidental constellation of random patterns that happened to align with something we discussed in the show.

Which, to my own frame of reference at least, was the moment that “beauty” transformed into “art” — it became a signifier that communicated some interior meaning. The algorithm created something beautiful, I added my own perspective to it, and then it became art. And the moment I select this image and use it for the episode in order to communicate an overall theme for the show, it becomes “art” for everyone else as well. The image is no longer an inert artifact, it is now a psychoactive signifier that communicates meaning from one subject to another. Beauty plus perspective equals art.

So what are these algorithms actually doing? Are they “art-generators”, or are they more like “beauty-generators”, creating an endless variety of “sunsets” that people can then enact as art, the very moment they bring their own perspective to the forms being created by the algorithm?

It is a very rich, fun, and fascinating conversation, and we hope you enjoy!

Written and produced by Corey deVos

This was a wild and wonderful episode, loved it! I was inspired to go to one of the sites that offers free use and put in my referents and style, and was surprised by how much of ‘me’ I could see in the piece, all unintended. It was fun! For people who want to play with AI generated art, I watched a video that claimed the best freebie site is Playground (can create 1000 images per day if you like, and allows for more detail in the piece similar to MidJourney), but Night Cafe and Open AI’s Dall-E2 were also recommended.

Some great discussion around this topic, as suggested by the write-up here. Thanks!

I’ve added/swapped out a few images for this piece: 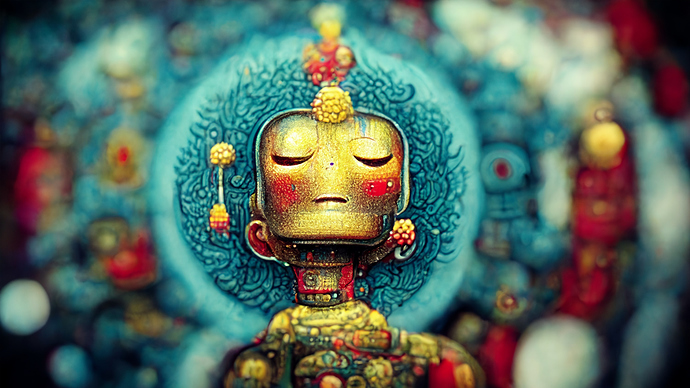 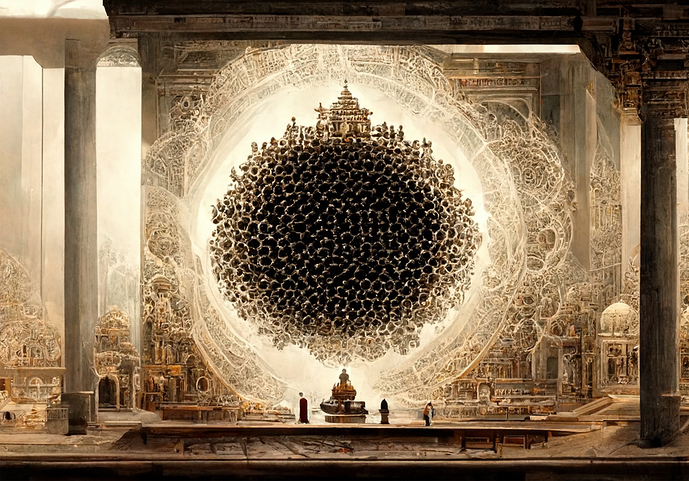 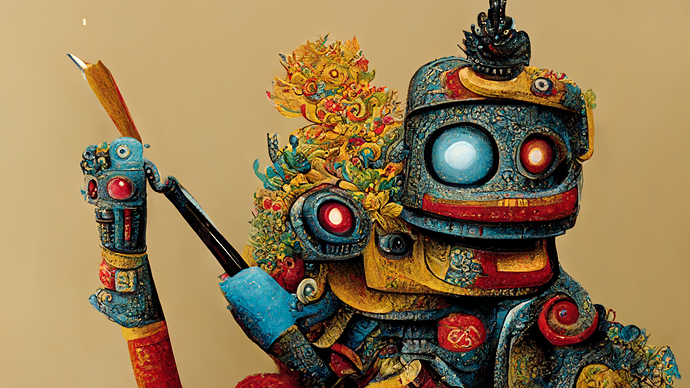