Transformational Theses: Your Doorway to Changing the World 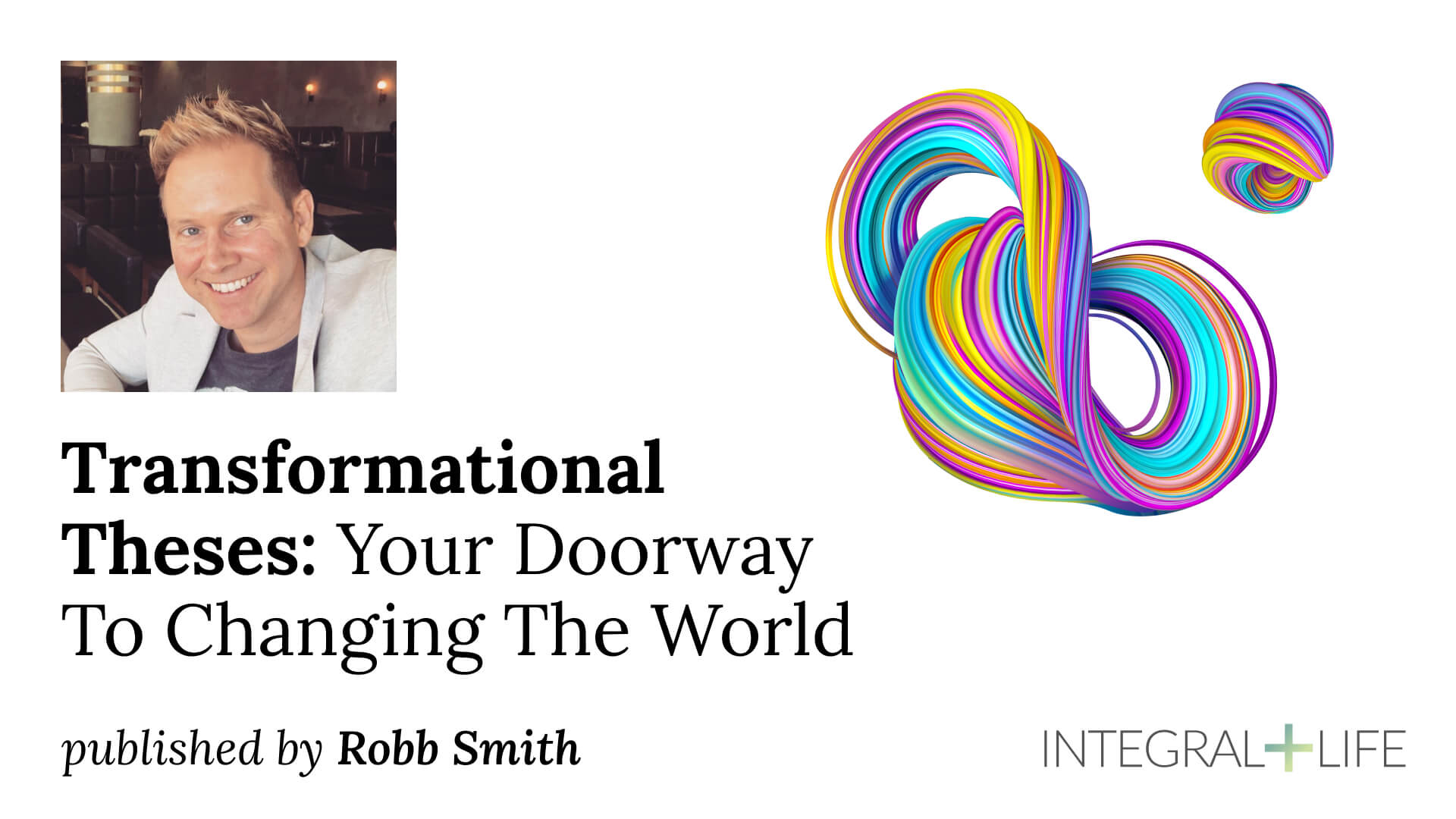 Transformational Theses: Your Doorway to Changing the World – Integral Life

A Transformational Thesis (“TT”) is the name for a specific hypothesis that if you can effect this change, you can achieve that outcome, and in particular this process of change is a transformational one in which a person, organization, system,...

We sit at a critical juncture of world-historical events where, because of our real-time global “informational nervous system”—from real-time news and social feedback to access to world history at our fingertips—we can sense the push and pull of history and evolution as it happens. Not only is this a new capacity for human civilization, it places a new and heightened demand on all of us in the integral community to become more skilled as integral transformation designers. No longer is history something that we just read about decades hence, we can actively picture our role in the evolutionary stream of events and take responsibility for our small part in it right now. And to do so, we need to better understand the concept of a Transformational Thesis , which I introduce below and outline this month for Integral Life members, who are a part of the most dedicated transformational change community in the world.

A Transformational Thesis (“TT”) is the name for a specific hypothesis that if you can effect this change, you can achieve that outcome, and in particular this process of change is a transformational one in which a person, organization, system, context etc. has moved to an overall fundamentally higher- and more-healthy form of long-term functioning.

Why Is It Important?

Everything in the universe is subject to constant change, and much of human life is characterized by focusing on a future that is different from the present: personal goals, organizational growth processes, political policies, business strategies, national initiatives, global crises… at every level of the evolutionary stack, and across every domain of knowing-being (all quadrants, states, structures, polarities, etc.), every occasion, every context, is also a process of ever-ongoing change. Sometimes the change is incremental and maintains the overall form and structure of the system/context, a change integralists call translational . But often we want to change the very form and structure of the system/context’s functioning such that qualitatively new, better and healthier forms of outcomes can emerge from the context: these changes are transformational , as they change the very shape of the system/context involved (i.e., they “trans”—go beyond, or change— the “form”—the shape).

But to understand how we’re attempting to effect a transformation, we need to bring some discipline to the precise hypothesis of what we’re going to change and why. If this process is not undergone, it is easy to inadvertently pursue translational change as if it were transformational, to have a sloppy understanding of our own objective, and to fall prey to the overwhelming power of pre-existing, dominant contexts, ideologies, energy patterns and the like. By going through the discipline of wrestling with a TT, these risks are mitigated (though never eliminated): we are forced to wrestle with the ambiguity of wicked contexts, to better articulate our grounding assumptions, to describe the actual mechanism by which we think a liberating structure can be newly-generated, and to expose the ways in which our thesis might really be just a recapitulation and regeneration of pre-existing, translational structures (to little transformative effect).

This short introduction to the concept of a TT cannot do justice to the full process of creating one, but it can give you a very good start. Before I outline a version of a process to create one, let me offer a few key context-setters and caveats:

Let’s dive into a simplified process of creating a TT, which could be a book-length topic but I’m going to condense (a lot).

As I’ve alluded to, creating a good TT isn’t a slam dunk. While any of us can create if-then statements, it takes some time, effort and creativity to really develop enough of an integral view of a context such that the right set of TT candidates can be developed. And it’s important that we acknowledge that in most real-world, large-scale wicked environments, there are no silver bullets, no one single TT that overpowers the mass of competing forces, incentives, consciousness, etc. that is creating the wicked context to begin with. This is another way of saying that silver bullets mostly only exist wherever simple, dominant (i.e., superholonic) power relations exist: by definition, the power function of a superholon is measured by the quality of being able to change the sub-holons included within its developmental or ecological holarchy. But superholons are already relatively good at identifying and attempting to change what is in their control, and so any problem today that needs a TT is still a problem precisely because it’s an enduring context beyond the simple dominance of an existing superholon.

The wicked environment of climate change, to take an obvious example, is embedded in the human-civilizational superholon, and yet that superholon has no simple, overriding power function that can force compliance and adaptation by the millions of psychological, political, economic, cultural, ethnic, national etc. sub-holons that constitute its membership. Therefore, the TT “if we lower carbon emissions, then all will be swell” is not so much wrong as it is trivial and useless. What we need is to understand the full, integral evolutionary stack of the climate change context, and then a broad portfolio of TTs could be developed to intervene at hypothetical transformational fulcrums. This is being done, of course, in a haphazard way as part of the evolving dialectical learning matrix of human civilization itself, especially amongst the worldwide community of climate change policy analysts, think tanks, NGOs, governmental bodies, etc. But I can’t help but believe that an integral approach to doing this would have shortened the 53-year lag between the time Daniel Patrick Moynihan accurately advised President Nixon of the threat of climate change in 1969 and the passage of the United States’s first serious (though not fully adequate) climate change legislation this week. Was a 53-year lag in leadership and action from the world’s dominant superpower inevitable? If not, where were the fulcrums that went unattended? Why were they not identified and acted on? And so on. This one example, and its context, should itself be a warning and a blaring invitation that we need to radically uplevel our capacity for understanding contexts more integrally, identifying transformational theses within them, and running experiments at the fulcra we identify.

This is the work and calling of integral transformation designers.