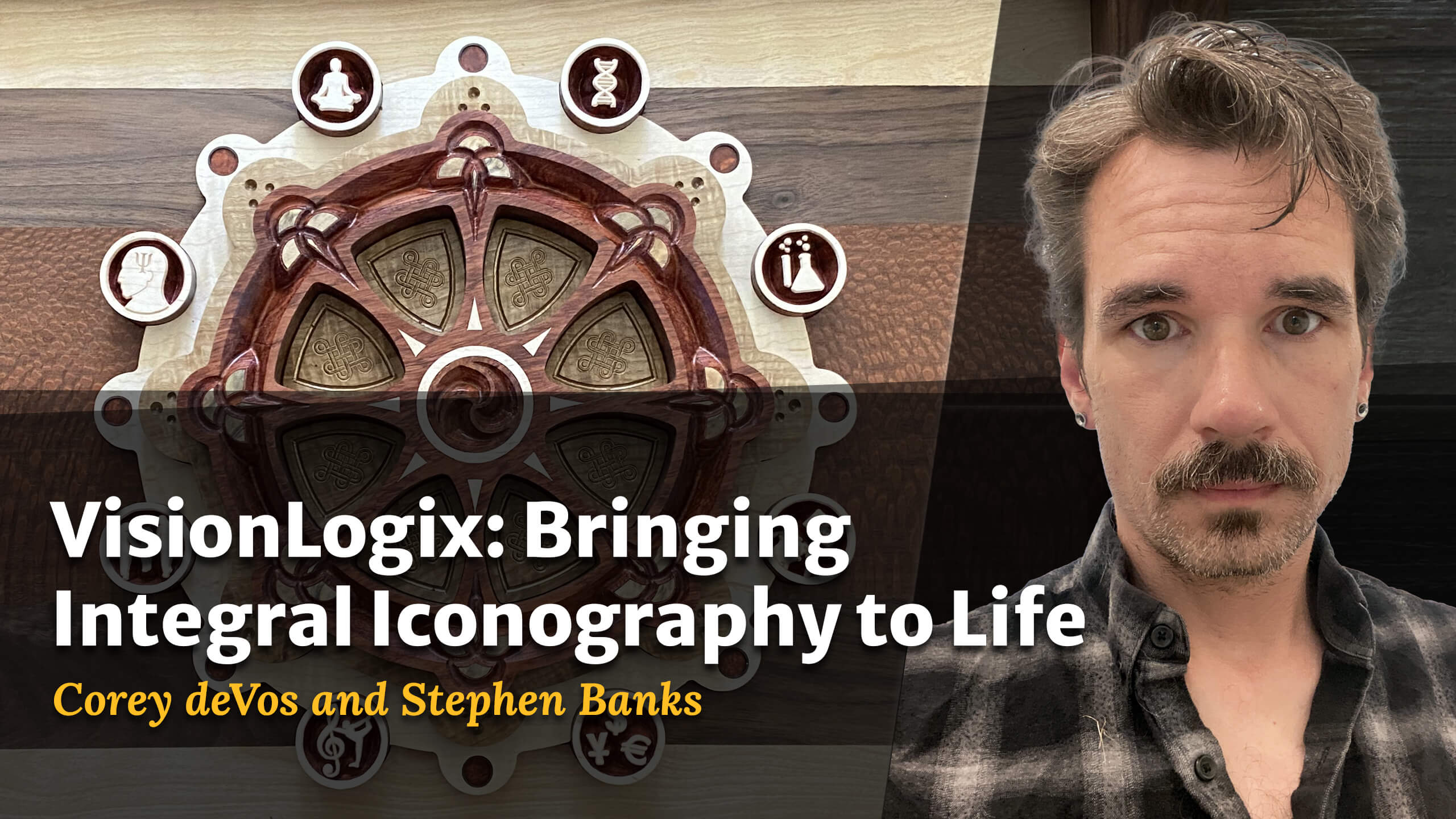 Corey deVos talks to Steve Banks about his integral approach to woodworking, and how he tries to transform beautiful ideas into beautiful art. Corey and Steve go on to have a robust discussion of integral art as a whole, as well as their shared...

Corey deVos needs no introduction to members of Integral Life. He has been Editor-In-Chief of the platform since its inception in 2003, creating an extraordinary series of interviews with Ken Wilber, and curating the amazing wealth of content that has appeared on the platform over 20 years.

Corey and Steve start out talking a bit about the world premiere of Steve’s major choral expression of Integral, ‘Blue Pearl: A One World Oratorio’, which took place on 14th May 2022. The high-quality film of the full concert, which met with a rapturous response, is now available to view on Integral Life. A must-see for anyone into Integral music.

Corey carves his Integral art in beautiful exotic woods, with designs created digitally and carved by computer-driven tools. He describes how a synchronistic combination of states and ‘structures’ led him to discover his affinity with this artform, which was also a confluence of many of Corey’s existing passions (including being inspired by the Japanese art of Shou Sugi Ban – charring wood by burning it). His story is a beautiful example of how an artist’s search for wholeness and happiness leads them to an artistic expression which is unique to their particular life journey. Corey talks about how this artform is an integration of a number of historic technologies, ranging from agrarian to industrial to informational. 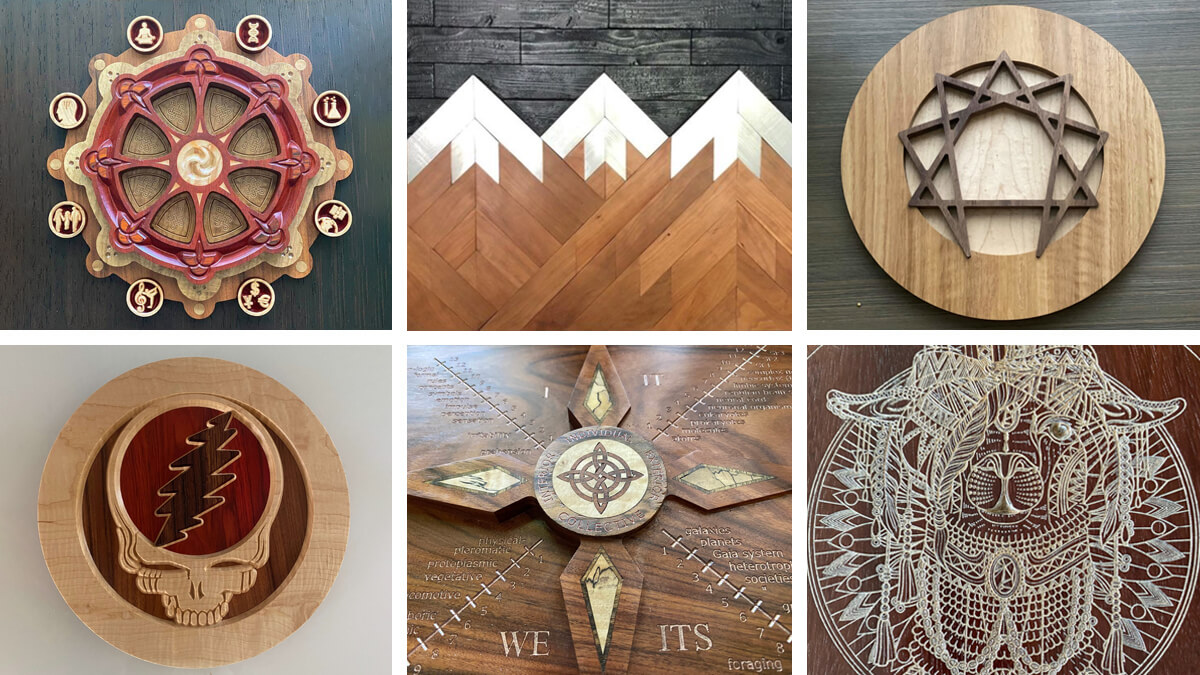 In recent years, much of my creativity has been focused around my woodworking. It has become an all-consuming passion for me, and over the last year or so I have created a number of custom-designed carvings that try to bring integral ideas and...

Corey then talks about his latest creation, ‘Fourth Turning Dharma Wheel’, a beautiful three-dimensional mandala representing the ‘fourth turning’ of Buddhism, with symbols representing the four Quadrants (and, indeed, the eight ‘zones’ of Integral Methodological Pluralism).

Corey talks about his other passion in the arts – music: how it helped him develop emotionally, and his DJ compilations of different tracks into an integral whole. He talks about how music is somehow harder to talk about than most other (visual) artforms, such as film. They also talk about how and why there has been very little classical music in the Integral world compared to other musical genres.

You can find some of Corey’s music mixes here:

Corey goes on to talk through his ‘Quadrant series’ – a series of stunning depictions of the ‘AQAL’ diagram (Quadrants and Levels) that has changed so many lives, and how the making of these pieces has been a part of the process over many years of deepening his interior experience of the quadrants.

Corey compares music to visual art, and explains how, for him, music has a particular power in the way that it bypasses the conceptual mind and leads you directly into altered states, with simultaneously both a transcendent and a directly immanent quality; whereas extracting the meaning from a painting takes some time. He reads a beautiful quote about music from Walter Savage Landor:

Corey explains how he hopes his carvings will impact the viewer, and his process of customising each piece for a particular person. And then they go on to discuss a question about Integral art in general: can you tell that a work of art is Integral just by looking at it, or hearing it? They talk about the ‘emergent’ feature of the evolving Kosmos which is so central to an Integral approach, and how therefore Integral art is likely to emerge in ever evolving forms. And how seeking out only art that is Integral may be missing the point, when an Integrally-informed viewer can ‘enact’ any art Integrally. They end with a brief look at some miscellaneous pieces Corey has made and Corey talks about where he sees his art going from here.

“The supernatural (powers) create wind in Heaven and they create wood upon earth.”
The Yellow Emperor’s Classic

Thought you might need another heaven and earth quote, Corey, this one related to wood. Given your affinity for it, maybe you’re a wood-“type” and maybe you’ve explored wood as one of the 5 elements in traditional Chinese medicine? It is the element associated with the Seer/Visionary and with Wise Decision-Making, among other things. The liver (visionary) and gallbladder (decision-maker) are correlated with the wood-type, (healthy) anger is the emotion that energizes, shouting is the associated sound which influences wood-types to express verbally in a forceful manner, and those with wood affinities need to be in nearly constant motion, etc. etc. There. More than you probably wanted to know, and less than might be useful

, but I thought of all this in relation to the interview, as well as trees/wood being such great canvasses for fun experiences of pareidolia

It was a great interview. Your understanding and explanations of all the different facets of your woodwork, from vision to the wood to tools to skill to integral germaneness and enactment and more, came across as full-bodied and as intricate as the art itself, and indeed, as IT itself is. Impressive. I loved the 8 zones being included in the Fourth Turning piece; that piece and all of them are truly gorgeous.

Steve’s stable and calm presence and porosity and sharing of his creative insights and work and your animated speech of sparks and waves made for both an invigorating and relaxing 100 minutes spent learning from and appreciating both of you and your work. I even had an Alice moment during a part of the conversation, as if I were in Wonderland, truly. To both of you, thanks!