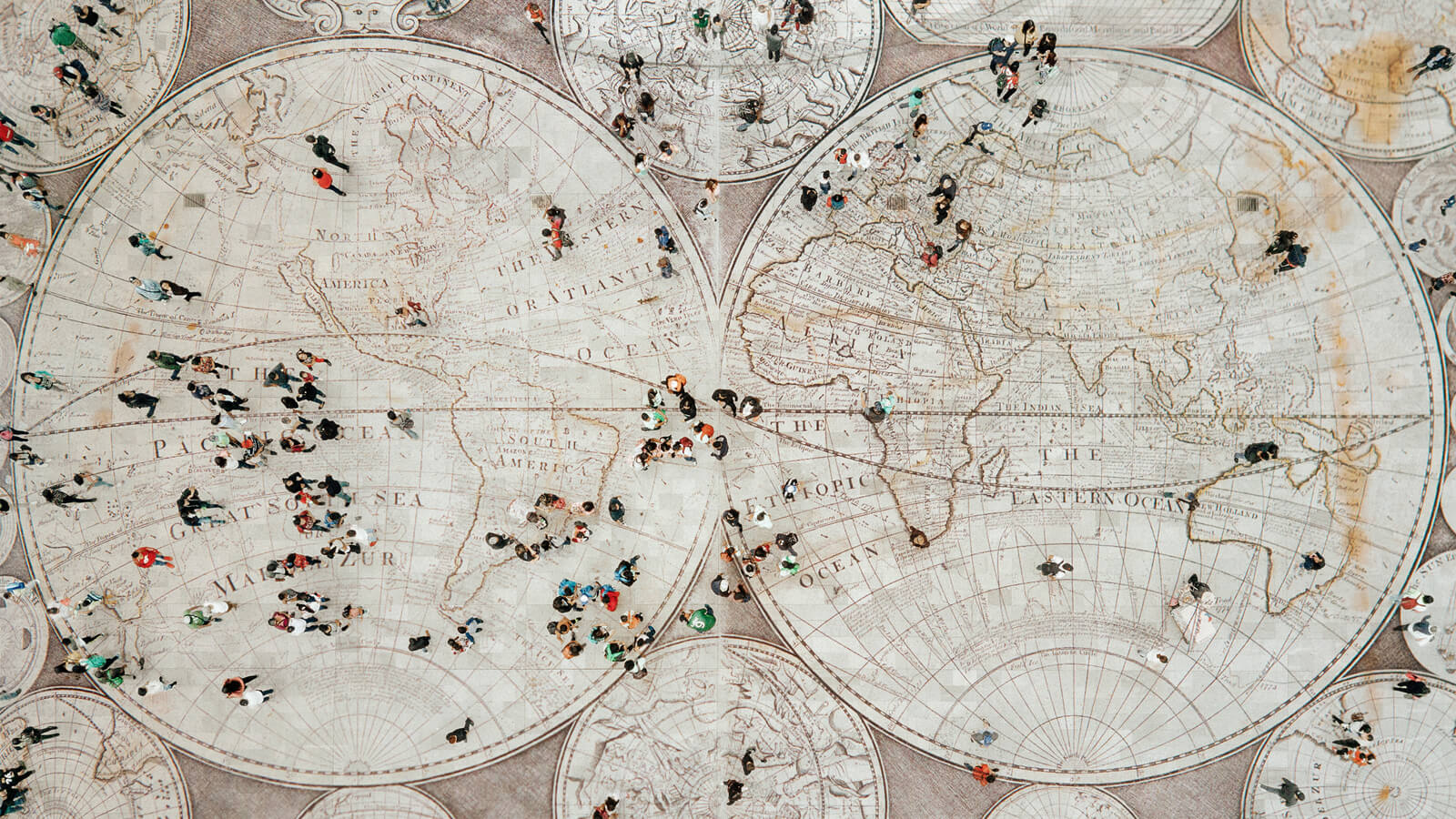 About Magdalena SmieszekMagdalena Smieszek is an international lawyer, human rights advocate, scholar and educator, having worked over twenty years around the world with humanitarian and development-focused organizations, including a decade with the...

“Once again, ‘unitas multiplex’ is still the best motto: universal deep features, but culturally relative surface features, are what we find in the growth to goodness.”Ken Wilber, One Taste

Immigration has been a wicked problem for society ever since the very dawn of civilization itself. We are by our very nature a migratory species, having colonized almost every major land mass on the planet and competed over the scarce resources provided by our local environments and social systems.

And yet, over that long and usually violent history, migration has been a powerful force in the unfolding of the human spirit. The ongoing exchange of ideas, values, identities, traditions, and worldviews has generated new forms of art, literature, engineering, science, and mathematics, while also deepening our empathy and understanding of each other, and of the human condition as a whole.

While the challenges and benefits of migration have been with us since the very beginning, in today’s world the problems have become even more wicked. We are now seeing an entirely new set of pressures and life conditions weighing down on us, as things like climate change drive new waves of forced migration at a time when the nation-state has become our primary source of identity, governance, and distribution of scarce resources, when social and institutional trust is at an all-time low, and when the boundaries between us feel more opaque than ever.

To allow too many immigrants into a nation-state can be seen as unwise, while bring too few would be uncompassionate. So how do we find a more integral approach to immigration, one that:

a) is based on worldcentric values, ethics, and moral reasoning
b) respects the humanity, needs, and dignities of the “other”,
c) respects the agency, identity, resources, and threat perceptions of citizens,
d) respects and includes ethnic differences without falling into ethnocentric thinking?

Watch as Magdalena, Mark, and Corey offer their own ideas. Topics include:

“The border is a handshake that becomes a squeezing contest.”

This is a line from “The Border: A Double Sonnet” by Alberto Rios. You can read the entire (short) poem, full of metaphors, at poets.org/poem/border-double-sonnet. I know Alberto; I wouldn’t consider him “woke” in the negative way that word is commonly used. Much of his poetry has been in the style of magical realism, but he did grow up on the AZ-Mexico border and as the inaugural poet laureate of Arizona, has written in response to the conflicts there, where, as Magdalena so aptly put it, “national identity and threat perception meet.”

As indicated by the time-and-topic log presented above, this discussion covered so many aspects of the complex immigration issue. Deep bows to Magdalena for orienting the conversation to the overarching Integral value of inclusion and the wholeness of humanity. And bows to Mark and Corey for verbalizing support of that value while speaking (so it seemed to me) on behalf of amber and orange perspectives/stages of development (e.g. cultural compatibility and demographics and resources), without all the excessive distancing and abstraction of people that these stages proper can tend toward.

One element of the immigration debate that garners little attention is the declining world population. This decline (thus far) is not based on deaths from Covid (750,000+ so far in the U.S., 5 million+ worldwide), or from any possible or projected future pandemic/disease or climate-related causes or war or famine or any other unknown, but is due to the actual current lower fertility rates (fewer births) which are expected to continue as a result of women’s education and work and the wider availability of contraception. 23 countries, including Japan, Italy, and Spain, are expected to see their populations more than halve by the year 2100. While the U.S. is expected to remain close to the same in population, the U.K. has reportedly already used migration as a means of boosting their population in compensation for the falling fertility rates, and China has gone from a one-child policy to a conditional two-child policy, to, just a few months ago, a three-child policy. The “problem” is that the world is expected to be populated primarily by older people, many 80+, with too few working-age adults. (bbc.com/news/health-53409521, July 2020, based on research at the University of Washington Institute for Health Metrics and Evaluation).

Some researchers predict that there will come a time before the end of this century in which countries will actually be competing for migrants in order to have a labor pool that automation cannot satisfy.

There are 70 million displaced people in the world right now, with climate-change, wars, and the waning of democracy throughout parts of the world (leading to rising authoritarianism, corruption, human rights abuses, and hopelessness for change) increasing that number even as we speak. “Masses,” “waves,” “hordes,” “surges,” “floods” of people, each a human being with a face and a name, and most of them looking to satisfy needs way down there on Maslow’s hierarchy–food, shelter, safety.

While I have a pragmatist in me too, I wonder how different the conversation might be if we conducted it as a “thought-experiment” based on the idea that migrants are needed. What brainstorms, what practical ideas might we come up with then around immigration? While the U.S. might not need immigrants now, we have needed them before and likely will again,.

Granted, there is that approximate 60% of the U.S. (maybe 50% worldwide) that is ethnocentric. I agree we cannot force people to grow, but can we or should we force the halting of growth in consciousness that has already occurred and is occurring at other (higher) stages of development? At what point do we ask people to disregard or subordinate the dictates of their moral conscience?

Tricky and tough questions, all around.

"The border used to be an actual place, but now it is the act of a thousand
imaginations." Alberto Rios

We need bigger and healthier imaginations.

I ran across this video today:

What we see is that Compassionate Immigrations is actually the Wisdom.

Here is a bit more boring but more authoritative video. The second video is old, but the second video of 2017 predicted the reality of the first video in 2021

I’m confused Ray. You live on a remote island and are prepping your bugout hideaway. That’s a pretty imaginative border strategy.
Or perhaps a bit of “good for thee, but not for me”?

What’s the confusion? Honolulu is one of the most cosmopolitan cities in the world, and it’s entire modern history is of welcoming outsiders. Yes, doing that was to the detriment of the original inhabitants in the 19th century - so strong borders were as I say a solution for 18th and 19th century problems.

But ever since the 1920’s and so on, foreign owned land and foreign people living here and becoming “local” is just accepted as a normal part of life. There are a few extremist views in some Nativist movements to “kick out” everyone, but even in the Sovereignty movement this is a very small minority - so maybe 100-1000 people in the state might be Hawaii Protectionist. IDK the exact numbers but living on an Island you HAVE TO HAVE import and export of goods and everyone wants to get “off the rock” now and again, so almost nobody is anti movement of people.
Then most importantly, the economy is based on tourism and you have to bring in foreign labor for a lot of that. Hotel guests want a clean room daily - which is provided by cheap labor mostly from the Phillipines, and tourists enjoy the great variety of foods within walking distance and so this logically means we want immigrant cooks, waiters and small business owners and all the rest.

The more I dig into it, yeah - Hawaii has always had far more open “borders” than lets say Texas, California, Arizona. Even though we share laws with those states, the difference is like night and day.